Where should the line between protesting and bullying be drawn?

A protest is defined (on dictionary.com) as an expression or declaration of objection, disapproval, or dissent. Peaceful (as in peaceful protest) is defined as characterized by peace; free from war, strife, commotion, violence, or disorder: a peaceful demonstration.

On Thursday March 8, 2012 a Norwegian delegation visited Campbell River to meet with First Nations leaders to talk about fish farms in their territories. Their plans to meet on Quadra Island had to be changed in light of threats made by protesters from the group Salmon are Sacred (SAS). For safety, the meeting changed venues to a golf club in Campbell River. The SAS protesters learned of the venue change and met the delegation at the club. The SAS claim that they put on a “peaceful protest” but their own photos, posted on their Facebook site, paint a very different picture.

Do these images look like a group of people who are all free from strife, commotion or disorder?

This man is clearly blocking the buses entrance to the event location and the bus driver is motioning for the man to get out of his way.

A blockade is defined (by Dictionary.com) as the isolating, closing off, or surrounding of a place, as a port, harbor, or city, by hostile ships or troops to prevent entrance or exit. Also: any obstruction of passage or progress. Thefreedictionary.com defines it as: something that prevents access or progress. These men have clearly created a blockade to stop this bus.

No one would define a blockade as part of a peaceful protest. The very act of blocking the bus shows the confrontational nature of these protesters.

This can further be seen as the “peaceful” protestors swarm the bus. 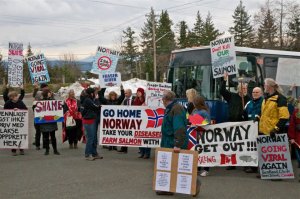 How is any of this an example of a peaceful protest “free from war, strife, commotion, violence, or disorder?”

Here is a picture of the same man who blocked the bus, clearly he is still confrontational and the woman he is speaking to is concerned for her safety.

Bullying (as defined on bullyonline.org) is persistent unwelcome behaviour, mostly using unwarranted or invalid criticism, nit-picking, fault-finding, also exclusion, isolation, being singled out and treated differently, being shouted at, humiliated, excessive monitoring, having verbal and written warnings imposed, and much more.

Even with a quick look at the Salmon are Sacred Facebook page it is easy to see the aggressive and mean language used to talk about specific people working for the fish farming industry as well as the industry itself. They clearly enjoy using the internet as a platform for nit-picking, fault-finding, singling people out and humiliating them.

They save the unwarranted or invalid criticism and shouting (Norway go home) for their “peaceful” protests.

These protesters could have chosen a different approach. They could have protested at the doors of the building, they could have respected the ministers and the bus driver by letting the bus reach its destination. They could have left a clear path for all parties involved to walk to and from the door of the venue. The course they chose was confrontational and does not fit with the peaceful nature with which they believe they conduct themselves.

Peaceful protests are effective because they are so rare.